What are the Key Milestones for Decentralizing Storage? When we talk about our vision for Space, and the future of storage, we’re certainly talking about what decentralized storage will look like, and what are the different milestones we, and the Open Web, need to cross to get there.

But, getting there is not a matter of one release, or a couple weeks of work. To get to the end goal, we must understand the different layers that define what storage is today for the web, and work layer by layer to rebuild a new storage paradigm.

Space is a reflection of that vision, and as we build it, we are exploring, preparing, and arranging the pieces needed to make this new storage paradigm a possibility on all fronts, not just personal storage.

The Milestones in Storage Decentralization

As we always say, we’re taking a procedural approach to decentralizing storage. Why? Because centralization in storage is composed of a number of elements, other than just the fact that cloud infrastructures are physically centralized. There are three clear milestones on the road ahead to storage decentralization.

Each of these points carries their own set of challenges and meta-milestones! So, let’s dive into each of these, and break them down to better understand why they matter separately.

The first milestone is a very core aspect of storage platforms, and well, web platforms in general. The current online or cloud storage paradigm is built to be corporation-centric, not user-controlled. This means that, from the get-go, users are not in control of their storage experience.

Instead, cloud storage is built as a guest service where users rent space, but have no definitive guarantees of control over that storage, or the terms behind its usage.

What’s more, guarantees exist, but are platform-specific, and can change affecting the access / control / privacy a user has on that platform. The issue is that, even if these guarantees exist, they are based on the trust the user places on the platform itself, since many conditions are simply contractually bound and not technically implemented.

Because of that, a lot of abuse goes unwarranted, or one as a user has to take a lot of negative platforms (such as data mining, or backdoors) for granted just to get access to cloud storage services.

How do we fix this? By making storage user-centric and user-controlled. Storage platforms have to give technical guarantees to users so that they are the only ones that can decide what their storage’s access, privacy, and security looks like.

This first milestone is what we are tackling in Space’s V1, building a user-controlled storage platform. By combining protocols like IPFS, Textile, and GunDB, we can create a platform that revolves around the user and not us.

Accounts? Ethereum-based and handled in Torus’ decentralized network; encryption keys and metadata? User-exclusive and stored in GunDB for users-only; their storage space? Built on IPFS and Textile to be user-specific and permissioned by them only.

Space can’t see, read, or analyze a user’s files or decrypt anything, and that is guaranteed by its architecture not by the trust the user places on us.

That’s the approach to tackle this milestone: building a platform where the guarantees are given by Open Web protocols and algorithms, not companies, and making it open source so that there’s no hidden trust elements. Everything has to be verifiable.

It is a direct parallel to the blockchain finance situation, where the blockchain technology itself gives trustless guarantees. Still, this step doesn’t cover the decentralization itself of the infrastructure like Ethereum or Bitcoin does, which is being developed on a different road and is another milestone on this list, with its own challenges. 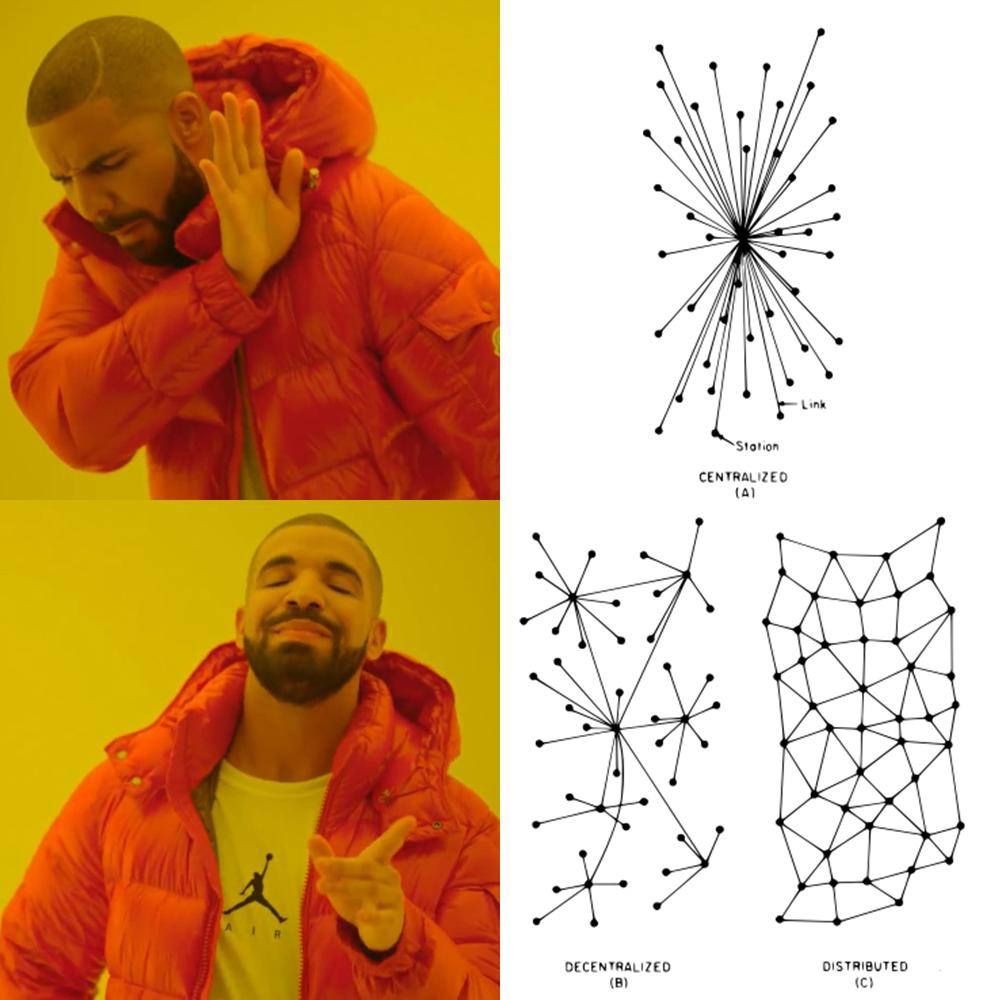 The second milestone is a known one, infrastructure. Building technical guarantees in the architecture of storage platforms is a necessary first step to prove that user-controlled experiences are possible.

That, however, doesn’t solve the infrastructure problem. Even if using a distributed and user-controlled storage architecture running on IPFS, the infrastructure for the platform and the nodes responsible for storage have an element of trust in someone (us in the case of Space) having to run them.

Therefore the next natural challenge is taking that architecture, building it under a decentralized and trustless infrastructure, and bringing decentralized storage networks like Filecoin into the equation.

What are the goals behind this milestone? There are two clear points here. First, eliminating accessibility risks related to the use of centralized servers for storage, as in events like regional AWS outages, data corruption, a company being dismantled, etc.

But then there’s the element of control. Decentralizing storage infrastructure is not just about the technical risk of placing huge chunks of the internet in a few server-services, but about the huge concentration of control that this setup gives to server providers themselves.

Here, the key conflicts we want to eliminate are control-based accessibility and ownership issues. Things like censorship, data abuse, unjust service denial or removal, and unfair sudden changes in the terms and conditions that put users between wall and sword.

This is our current stage at Space! Working hand in hand with protocols like Filecoin to begin adding a layer of decentralization in storage for users, by having files backuped redundantly in Filecoin as a guarantee that they exist in a non-Space dependent network.

The next challenges in this stage? Deepening the integration and expanding Filecoin’s functionality for users to leverage it through Space other than for archiving/backups; and exploring what decentralizing the platform/interface’s infrastructure itself. 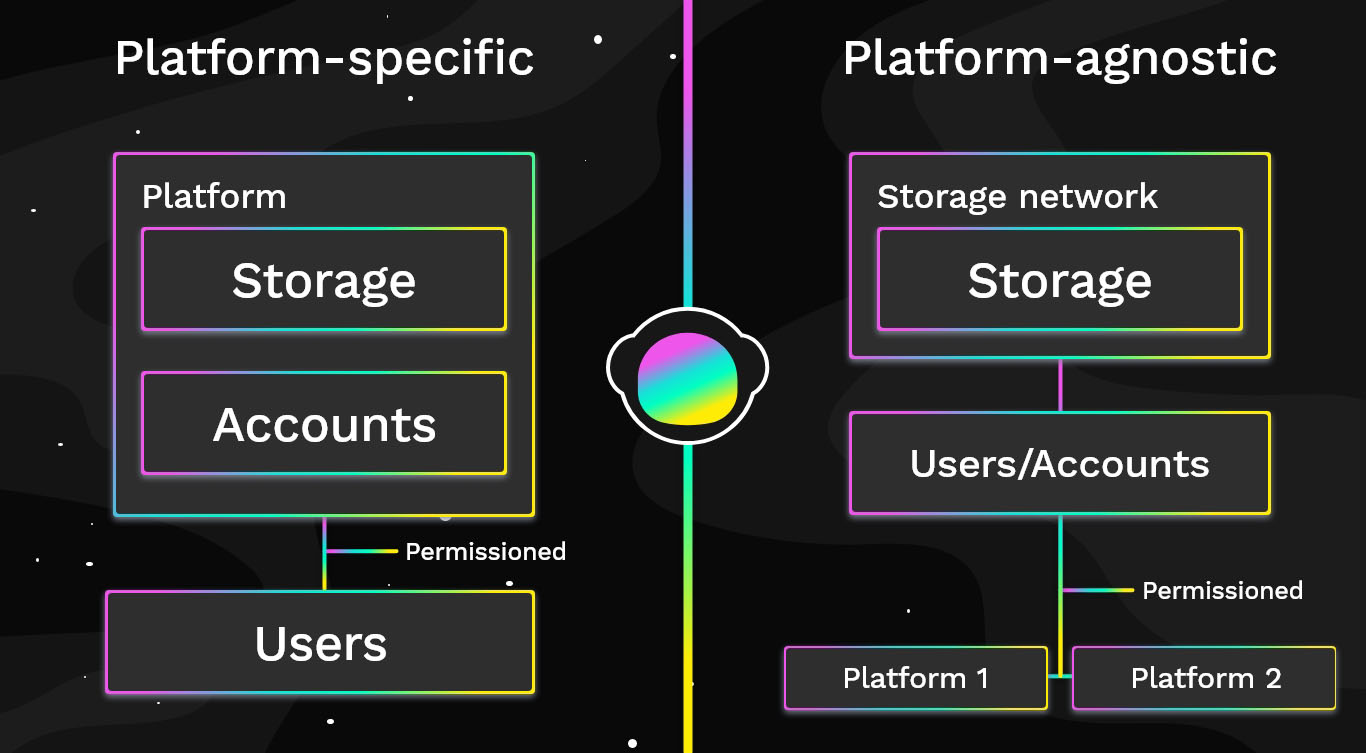 Finally, with open storage networks in the equation, we can move on to the next challenge. To truly break that corporation-centric storage paradigm, where users are guests to a platform’s infrastructure, we have to take storage into a new shape by separating it from platforms and making it interface agnostic.

Users would be able to store their data in an open network that’s not platform-specific (as in, not owned by Dropbox, for example), and interfaces would just aid them in this process, but without the user’s data, account, or the network where it is stored being dependent on them.

If the company behind that interface/platform disappears, or the user simply wants to use a different one, they won’t lose their files because the storage layer is separated and independent.

Users, as the center of this model, would own an account that owns storage in the storage network itself, and permission the interfaces to access it and help them manage it. A heavy contrast to today’s model, where accounts are platform specific, and so is their storage. If you sign up to Dropbox, your files and account are siloed in Dropbox and if Dropbox isn’t accessible, the same goes for your storage and account.

This last milestone definitely carries a tremendous underlying impact, because it has the potential to rethink user storage, and user-data storage entirely for the Open Web.

Since users would own their own personal “storage” account in an open storage network, not only they will truly own the files they store there, but the platforms and applications they use online (social, for example) could potentially point to that open infrastructure and store user-data generated in their platforms on the user’s personal storage, giving them full control over the data they generate online.

So, what does the commercial and payment factor of these open storage networks look like? You can take a look at Filecoin today and see! It works in a similar fashion to the blockchain economies we know and use today, like Ethereum.

To put it in brief, the people that offer their storage on Filecoin are the “miners” who get rewarded (or paid) for being part of this open and decentralized storage network, ensuring persistence (penalized if not). Users are then people who need storage, therefore they pay miners for using their hardware. And all is regulated by Filecoin’s blockchain automatically. An open, transparent, and trustless infrastructure

These milestones don’t fall short of a challenge, but we are seeing the underlying protocols of the Open Web evolve month after month to continue to allow us to move forward!

The collective push has been amazing last year, and if you get a glimpse at, for example, what the IPFS community has in store for this year, you’ll be just as excited as us. It’s not an understatement to say that IPFS has started the year off with a bang by revealing the native integration of IPFS on the Brave browser!

Milestones like these bring a lot of momentum to our mission, and lets us know we’re on the right track and aligned with the community, so get ready for what’s coming 🔥